The Best Place In Britain to get Your 'Bridgerton' Fix

Bath, United Kingdom · About Culture & History
The steamy, historic-fantasy Netflix series ‘Bridgerton’ couldn’t come at a better time to brighten our stay-at-home winter blahs. We aren't surprised it's shattered Netflix viewership records.
Bridgerton is an early-19th century, light-hearted romp of an historic romance on steroids. Bridgerton follows the intrigues of the young Bridgerton family and their high society friends, enemies and potential mates, their scheming mamas, and the revelations of Lady Whistledown's scandal sheets.
It's fantasy and eye candy of the highest order, with impossibly beautiful and sexy and famously diverse cast members, all outfitted in lovelier-than-life, Empire costumes that wouldn't look out of place on a runway, set against the sumptuous backdrop of British Regency-era elegant, lofty neoclassical architecture and sets with sweeping staircases, rooms where pastel silk walls match light-as-air upholstered furnishings and decadent carpets, all under glittering chandeliers. 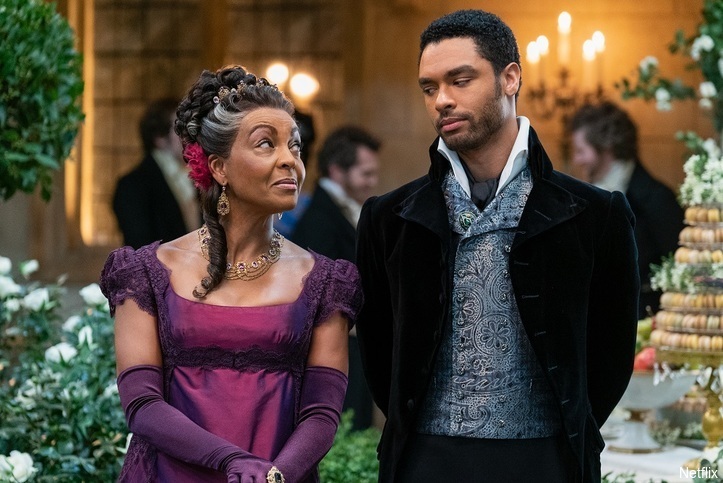 (Above and top; courtesy Netflix)
Some of the most spectacular Bridgerton interiors (like the Bridgerton and Featherington homes) were purpose-designed and built sets.
But much of the series was filmed in the very real English city of Bath, where you can still capture the spirit of Bridgerton on your travels. Its natural, therapeutic springs were discovered by the Romans and became a feature of high society English life during the Regency era (immortalized in the works of Jane Austen). That sparked a building boom that transformed Bath, which retains an abundance of graceful period architecture and connection to Regency England today. 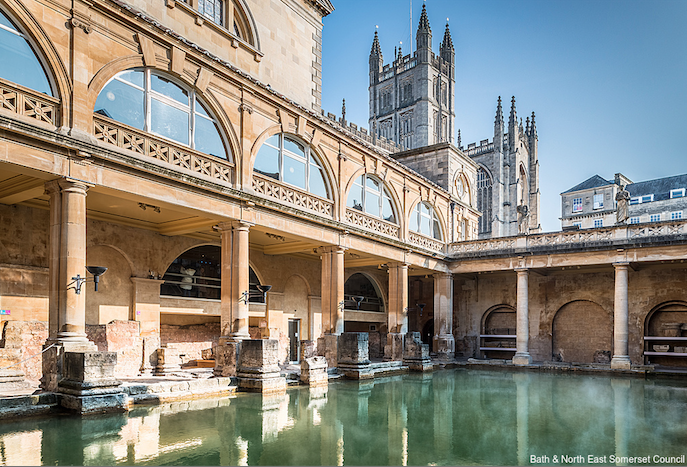 (Courtesy Bath and North East Somerset Council)
Our friends at Visit Bath have revealed a list of Bridgerton filming locations you’ll want to explore on your next trip to Britain.

One of Bath’s – and England’s - most iconic landmarks, Bath’s Royal Crescent is a breathtaking backdrop for filming. The Crescent – built between 1767 and 1775 – is arranged around a perfect lawn overlooking Royal Victoria Park and forms a sweeping curve of 30 protected, historic terraced houses.
You won’t miss it in Bridgerton or want to miss it in your own social media posts. 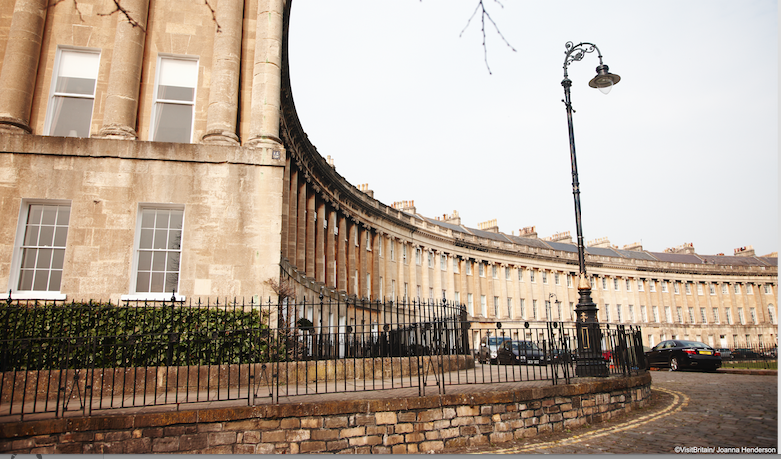 The exterior of No.1 Royal Crescent is used as the home of the Featherington family, where Lady Featherington schemes to find husbands for her three daughters in competition with the beautiful Bridgertons. In real life, No.1 Royal Crescent is a museum which has been decorated and furnished just as it might have been during the period. The rooms feature historic furniture and objects that reveal what life was like for Bath’s fashionable residents, both upstairs and downstairs.

Bath Street, with its cobblestones and colonnades lining both sides of the street, appears in the first trailer for the show and is used for several street scenes. At the end of Bath Street is the Cross Bath and Thermae Bath Spa. That’s why this area is known as the Spa Quarter, where the region's natural, underground springs bubble to the surface at a temperature of 46 degrees F.
Unadorned by shop signs and capturing eighteenth-century Bath perfectly, the street easily slips back into a vision of its historic past.

Tucked away behind the Roman Baths, you’ll find The Abbey Deli (previously called Pickled Greens), on Abbey Green. You’ll quickly recognize its typically-Georgian/Regency bay windows. In Bridgerton, the café stands in for the Modiste – a dress shop where much intrigue unfolds.

Beauford Square, used for more street filming, is a square of two-storey cottages built in 1730. The south side is formed by the original frontage to Theatre Royal Bath, and in the center is now a small rectangular lawn, enclosed with wrought iron railings.

Bridgerton’s fictional high-society events and lavish balls, where the characters dance and socialize, share and create gossip, require equally grand and elegant sets.
Bath’s real-life Tea Room and Ball Room of the Assembly Rooms make perfect, grand backdrops for the sumptuous ball scenes full of glamorous and vivacious costumes and hairstyles. In a sense, they return to their own roots, when the venues were the social epicenter of Georgian Bath. When they are not in use as meeting and event spaces today, you can visit them and imagine yourself twirling and romancing the evening away.
Bath’s Assembly Rooms are home to spectacular, original Whitefriars crystal chandeliers and the largest eighteenth-century room in the city.

The Banqueting Room at the Guildhall was also used for ball scenes in the series. The elegant Georgian venue, with grand staircases and elegant plasterwork, ornate gilding, historic paintings and soaring ceilings. 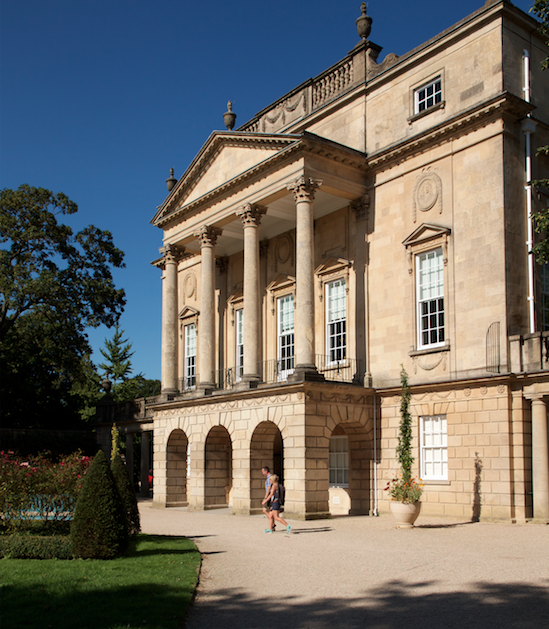 The exterior of the Holburne Museum stood in for Lady Danbury's grand home in Bridgerton. On the impressive approach to the building, its elegant façade and gardens hint at its real-life grandeur and history as an elegant hotel.
Wander around Bath, you feel transported back to the Regency era of England and to the fictional lives and lifestyle of the Bridgertons. You can almost imagine someone passing you one of Lady Whistledown’s society-shaking gossip pamphlets! 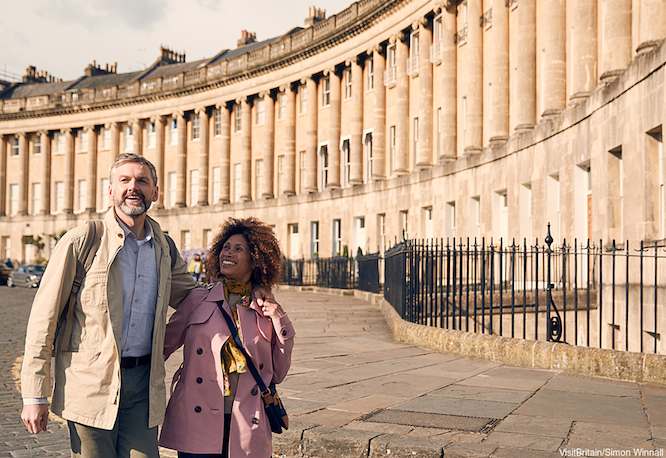 Image copyrights as noted above
Copyright BestTrip.TV/Influence Entertainment Group Inc or Rights Holder. All rights reserved. You are welcome to share this material from this page, but it may not be published, broadcast, rewritten or redistributed.

Video: 8 Restaurants You Won't Want to Miss On This Luxury Silversea Cruise

Best Reasons to Travel to Europe's Christmas Markets this Year